Augmented Reality May Not Be Useful, But U2 Is Changing Concert Experiences With It 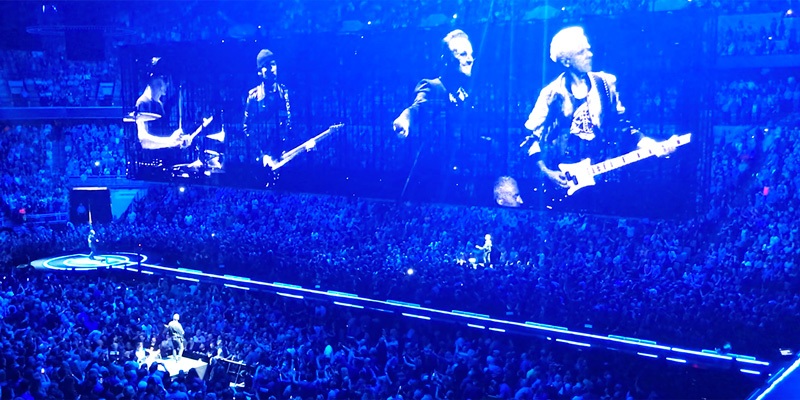 Virtual reality (VR) and augmented reality (AR) are in the news quite often. We’re still in the early days of this technology, even five years removed from the initial release of Google Glass. The hardware in our mobile devices and computers are improving more and more each year – lowering the barrier to entry for more meaningful AR/VR experiences – and millions of dollars continue to be raised in the AR/VR space. And yet, we still haven’t found that “killer app”.

Promises abound in this new way of interacting with the digital worlds we are creating, and I believe we will get there – it’s just taking a bit longer than I thought. But it’s in this slow march that I get glimpses of what could be.

On Saturday night, I attended the U2 concert at the CenturyLink Center in Omaha. For over two hours, the band performed a blistering combination of new tracks from their most recent album while mixing in old favorites. I could go on and on about the music, but what I want to highlight is what U2 did differently this time out.

Since their Zoo TV tour in 1992-1993, U2 has been pushing the technical limits of what can be done at concerts. They’ve grown their stages as well as their show’s technical complexity, bringing in more multimedia. But their eXPERIENCE + iNNOCENCE tour is going headlong into the thing that some performers hate to see at their shows: mobile devices.

A little over a week before their Tulsa, Oklahoma tour kickoff last month, U2 fan club members received an email with the subject line “Augment Your Reality”. It included a link to an AR (augmented reality) app for Android and iOS devices along with the following message:

#U2eiTour will see a specially curated AR scene-setter—triggered by the 100-foot-long LED wall running the length of the arena floor—herald the band’s arrival on stage. Then check out the opening song… for a live show experience you can share with all your friends, as well as thousands of other fans at the show. Download the U2 AR eXPERIENCE App for iOS or Android ahead of the show and see how it responds to the Songs of Experience album cover image at home.

I downloaded the app as soon as I could and pointed my iPhone 7 Plus at the cover of their Songs of Experience album. An AR version of the album displayed over the jewel case and then flew away in tiles. The album’s first track, “Love Is All We Have Left”, began to play while an extruded Bono raised from the cover to sing the track’s opening lines. While it only lasted about 30 seconds, it was enough to get me ready for the show and what surprises it may have in store.

Thinking back on the AR intro of their show, I feel like I witnessed a plausible use that could help shape the future of live entertainment. On paper, what they did sounds simplistic but witnessing it literally gave me chills. Yes, I thought it was that good. We had to hold up our phones to get the effect, but imagine if we all had glasses or contact lenses that did that work instead?

We weren’t the only ones with VR at their disposal. At one point, the band used AR with Bono’s face to bring back a popular alter-ego from the Zoo TV tour. That was a fun surprise.

For several years, we’ve been hearing how virtual reality (or augmented reality) can be the next frontier in human-computer interaction (HCI). Many of these implementations have been clunky or expensive or not well thought out. We’re still in the early days of this technology, but it should improve as the processors in our mobile devices get more powerful and the software becomes more refined. Who knows, augmented may be commonplace sooner than we think.

While U2’s use of technology isn’t as overtly subversive as it was in the early 90s, its application still makes an impact – and probably contains some deeper messages about life in the 21st century. Perhaps, but I’m not writing this piece to wax philosophical.

I still find AR/VR to be a “solution-in-search-of-a-problem”, but I’m confident we’ll encounter a viable use along the road toward its maturation. As designers continue to refine their language for this world, I’m confident new possibilities will open up. We are still in the nursery, trying to grasp the basics of what communication and the practical application of this new medium looks like. It’s playtime, and I’m happy to have some fun like this.

But watch out, adolescence is right around the corner and we’re going to face a new realm of moral, ethical, and societal struggles.