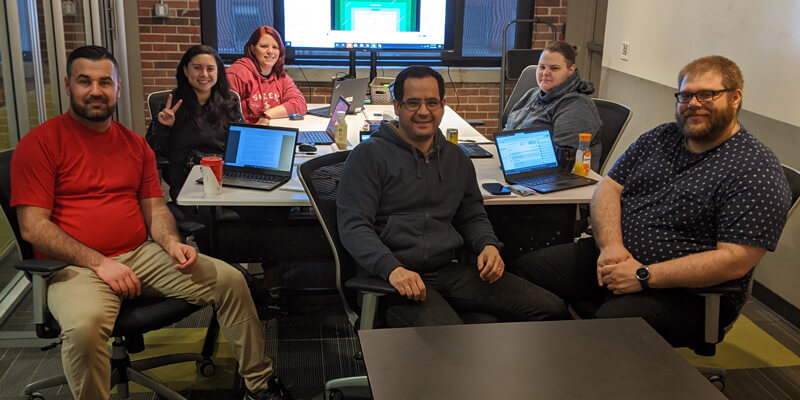 Don’t Panic Labs and Doane University are proud to announce that their software education initiative – called the Nebraska Dev Lab Pipeline Program – has completed its inaugural cohort, and its participants are transitioning to their sponsor organizations as software developers.

The Pipeline Program is an immersive nine-month software development training experience, although the first cohort was 12 months in length. Its novel approach to education is addressing the ongoing tech talent shortage in Nebraska.

Instruction during the first stage was led primarily by Doane University. During this time, the cohort transitioned from meeting at Don’t Panic Labs’ offices to remote learning as the effects of the COVID-19 pandemic worsened.

The second stage was led by both Doane and Don’t Panic Labs as they transitioned from a focus on programming to software development.

The third stage was led by software architects from Don’t Panic Labs as advanced topics were introduced. During this stage, the cohort also applied what they had learned by creating a mobile application for the Nebraska Suicide Prevention Coalition.

During the fourth and final stage, participants worked as apprentices at their sponsor organizations as part of a software development team.

“I’m incredibly proud of this cohort,” said Doug Durham, CEO and co-founder of Don’t Panic Labs and co-founder of Nebraska Dev Lab. “Our program is a challenging endeavor when you consider all that they must absorb and put into practice. This group had the added burden of doing it during a global pandemic, but that didn’t slow them down.”

Now the Pipeline Program is looking back on its first year to find ways to improve future cohorts.

“We knew there would be a lot to learn from our first cohort,” said Alec Engebretson, Professor of Information Science & Technology at Doane University and co-founder of Nebraska Dev Lab. “We’re already looking at what worked well and what could be improved. It’s exciting to see how our next cohort will take shape.”

The cohort also achieved what was thought to be one of the most challenging goals: have all participants complete the program.

“All along, our goal has been to have a 100% success rate, but to achieve such a lofty target is special,” said Engebretson. “This achievement is largely due to the high-quality participants sent to our program by the sponsor organizations.”

The Pipeline Program is recruiting sponsor companies to be part of its next cohort, which will begin later this year. Sponsor companies cover the program cost for their participants, in addition to assisting with living expenses over the nine months and committing to placing them in a developer position upon successful completion of the program.