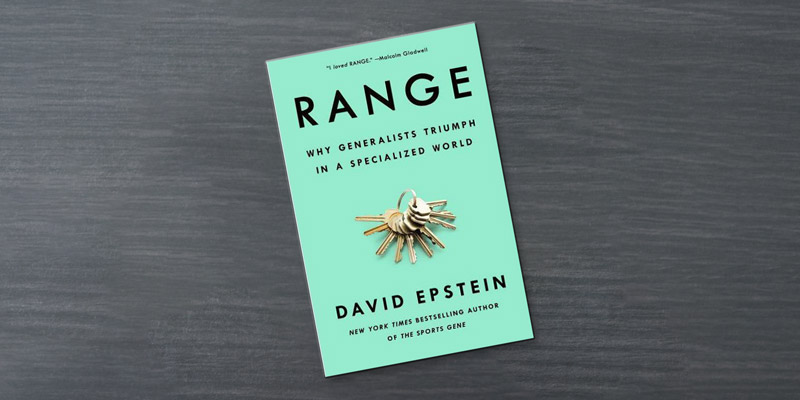 Like many readers, I have enjoyed many of Malcolm Gladwell’s books. His book Outliers has been very influential on our culture’s thoughts. The 10,000-hour rule is known by most of us at this point; it has almost become a rule that people believe to be true. But in the book Range: Why Generalists Triumph in a Specialized World, author David Epstein offers a somewhat counter-argument to the 10,000-hour rule. He argues for generalists (that is, people who have broad interests and knowledge), not the specialists with a ton of hours poured into a single skill.

The book opens with a story of two athletes who took wildly different paths to achieve greatness in their respective sports. Tiger Woods started practicing golf almost at the age he could walk. But tennis great Roger Federer is a different story. Federer played many different sports growing up and didn’t focus on a single sport until much later. This comparison sets up Epstein’s argument that generalists (Federer) can succeed like the specialists (Woods).

One thing that really resonated with me in the book was the notion of Kind vs Wicked environments. Kind environments have very defined rules, and they have very particular outcomes based upon the inputs. In these environments, going deep has big payoffs. But many of us live in Wicked environments, where the rules of the game are not easily defined. Where the next move isn’t so obvious. Here, Epstein argues that breadth of knowledge is more valuable than going particularly deep on any given subject.

Software development is a Wicked environment. While on the surface it may look like a Kind environment, anyone in our industry will tell you otherwise. Software problems are rarely “rinse and repeat”. Often, they require a good amount of thinking even before tackling the problem. Software often requires a mixture of domain knowledge with deep technical knowledge to land a successful solution.

Great Insights for Everyone

Range has been on my reading list for a while, but I’ve had a few other books in my personal queue. But I’m glad I finally got around to it. I think it will influence me in a few ways.

First, as a parent, I am encouraged that my lack of desire to force my kids into going super deep in something is okay. It seems like a wise approach to get them interested in a variety of subjects. Second, I need to keep learning from other domains and areas as it will help me make better decisions in many aspects of my job. Having a wider breadth of knowledge can be useful in real-world Wicked environments, so the ability to pull from a wide range of experience is an asset.

I recommend giving Range a read. It may encourage you to broaden your experiences, which can aid in your decision making.