Beer && Code: One of Our Favorite Local Meetups 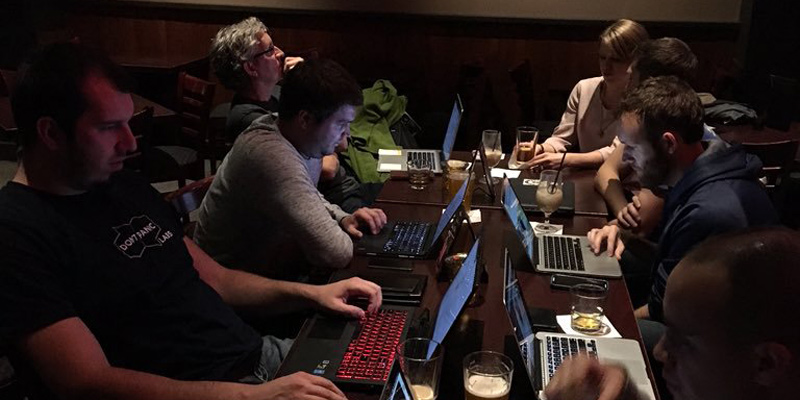 One of the great things about Lincoln is its growing number of educational opportunities centered around technology and software development. One of them is near and dear to our hearts: Beer && Code. Started by Don’t Panic Labs software engineer Branden Barber (aka Beebs around the office), this monthly get-together meets at various locations around the city.

A bit about Beebs: it should be no surprise that he helped found this meetup. He’s passionate about many things, and that passion translates into action. He cares about conservation and the environment, so he installed solar panels on his roof. He loves model airplanes, so you’ll find him out and about flying his aircraft. He’s a bike enthusiast, so you won’t find him in his car when the weather is nice. And he’s a software engineer, which led him to form a meetup around software development.

To learn a bit more about the history and purpose behind Beer && Code, I threw a few questions at Beebs to get the inside scope on Beer && Code straight from the founder.

How long has Beer && Code been around?

Our first meeting was in December 2012, so we’re working on seven years. In this time, we’ve seen quite a few meetups come and go, but Beer && Code is going strong. It helps that the group is unstructured, so there isn’t much effort that goes into organizing it.

What led you to start it?

Co-founder Josh Branchaud (@jbrancha) and I met weekly for lunch during our last year of school. During this time, we were starting to get involved in the local tech community. We saw that there were beer && code groups in other cities (including Omaha), but no active group in Lincoln so we ended up starting one. We grabbed a Twitter handle and bugged our friends and co-workers to join us for a monthly social gathering.

What is the purpose of Beer && Code?

The name Beer && Code is a little misleading since it’s really not about Beer _or_ Code. It should really be called Chat && Connect or something. The majority of the time, there isn’t a ton of code being written, although it depends on the person. The group ends up chatting about what they’re working on, or some new tech that they’re learning. I’ve met a lot of interesting people over the years

What if you don’t know how to code? Is this meetup just for developers?

No previous experience required! Anyone in the tech community or wanting to be in the community are welcome. Side note – this is not designed to be a recruiting opportunity. It’s cool that your company is hiring, but folks don’t want to be hounded.

How many people usually attend?

It really depends. We’ve had as few as three, and at most 40+. But I’d say we average 10 through the years. I haven’t promoted the group very much since planning for a party size greater than 12 becomes a challenge.

Nowhere too crazy, usually just a bar or restaurant with Wi-Fi. We did have one meeting in the basement of Don’t Panic Labs (Barnyard) to celebrate our 5-year anniversary if I recall. The free beer really brings in a crowd

What’s the craziest thing to happen during Beer && Code?

Nothing “crazy”, but we’ve had a lot of laughs.

How can people keep informed with dates and locations?

Twitter is the best place. The date is always the 2nd Wednesday of the month at 7 pm, so setting a recurring reminder in your calendar is your best bet for not missing an event.