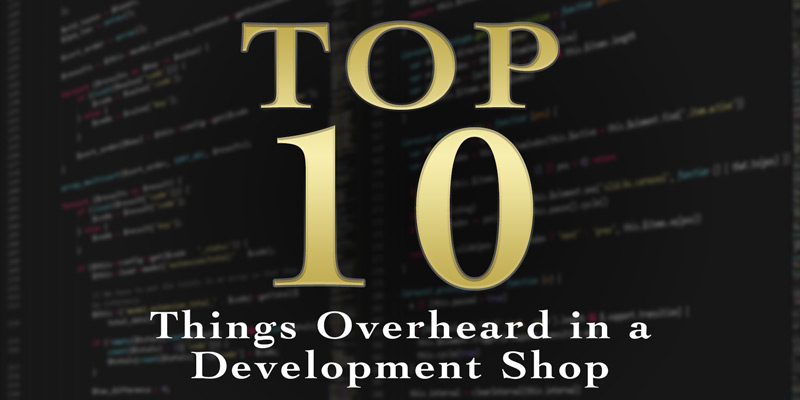 This is often heard when developers don’t come up with the best solution and have to compromise to something that isn’t quite wonderful.

When problems occur, the first place to look is usually the logs. This actually might be a wise thing to do.

A common phrase in development shops is “did the user do something wrong.” This usually isn’t a good line of thinking. Instead of asking what the user did wrong, start thinking analytically about the problem. Maybe look at #9.

This one is pretty common, in either of its two forms. When this occurs, it is usually best to dig for more information.

Programming by hope doesn’t feel great. Often this quote relates to trying something in an environment that is not a developer’s machine. Sometimes you have to try something to see if it will work, but often you can fully test something on your machine first.

This is a great standup starter. You can almost feel everyone lean in to listen.

Never test in production. Almost all problems can be tested in another environment first. This one kind of goes with #10.

Another way to get a lot of attention in a standup, but cause blood pressures to rise. This one is often heard after some investigation. Maybe a #9 plus #7 can result in a #3.

Yep, this happens. Often when some of the items above happen.

Maybe not the most heard statement, but probably the one with the most energy. Often with this one the developer is in a bad spot. This can mean troubleshooting is difficult and progress will be slow going.

I’d like to thank Nathan Wilkinson, Ceren Kaplan, Chris Niemann, and Santi Murtagh for contributing to this list.