From Educator to Software Engineer, Part 2 – Interviews and Interns 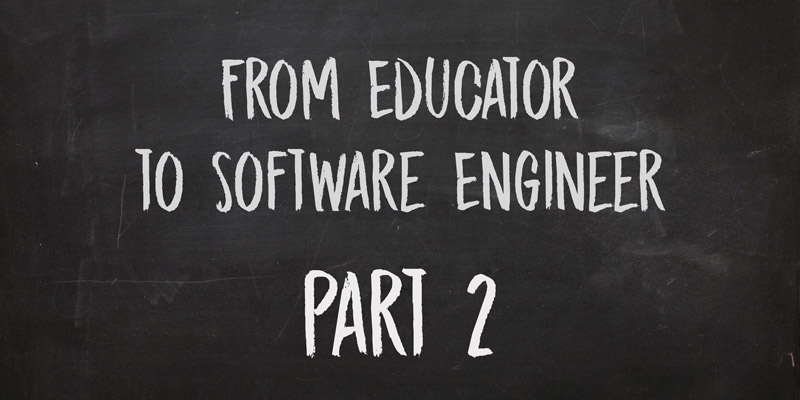 Make sure to check out part 1 of my series if you haven’t done so yet.

I am a 30-year-old developer finishing my first year as a software engineer. I didn’t get where I am by any traditional means, but I’ve learned some things along the way that might encourage someone to follow their interest in finding a place in the world of software development. Here’s my story:

I was in my last quarter of teaching for the year when I got news of a scheduled interview with Don’t Panic Labs for an internship. A few weeks earlier I was told that there were no more spots left for interns, so I guessed that I was getting an interview because I was such a black sheep to them—it can’t be every summer that you get an adult with an established career applying for a summer internship.

Before too long it was the day of the interview, I wrapped up my day of teaching and left the parking lot of my middle school with an odd feeling in my stomach. I wondered if I was making the right decision, wondered if I was about to make a fool of myself, and wondered if I had what it would take for this new world.

It’s hard to describe how excited and nervous I was about the prospect of being interviewed by real developers. I’ve only interviewed for part-time positions and teaching jobs before. What would this be like? I would be lying if I said I didn’t Google potential questions for software developer interviews and strategies for this type of interview.

The interview was a blur. I was on the edge of my seat the entire time waiting for one of the four interviewers to ask me for an answer about code or theories about software development. To my relief the interview consisted mostly of questions about my work ethic, attitude about working with others, and curiosity about the path that brought me before them that afternoon. I couldn’t have been happier about the four people who interviewed me. They all seemed very interested in my quest to join their ranks and were curious about my previous work with building software for my school. I left the interview feeling like I had done my best.

Days stretched into weeks as I waited for news about the internship. As you know now, I got the job, but it seemed like forever until I found out about my new summer plans. I was giddy with excitement as I scheduled my first day of work the Monday after my first weekend of summer as a teacher. A friend advised against moving from one job to another without a break, but I was on a mission to make a good impression and get to work.

The last weeks of school seemed surreal wondering If I wouldn’t be coming back to the profession, I shared my good news with a few colleagues and some of my favorite students while receiving mixed reactions. While none wanted me to leave, I felt like they all wanted to see me do something great with the skills I had developed. In the end, I had a sense of purpose. I would make the best of the summer internship and either prove myself worthy to be an engineer or take what I could learn and apply it to continuing to build software for my school. My glass was half full.

Full disclosure: when I was a sophomore in college I started an internship within the IT department of a publishing company. Being an intern wasn’t exactly something brand new to me. That said, I probably got less sleep than the day before students showed up in my classroom for the first day of school, and any teacher will tell you that’s not much.

The day started like most jobs; tours, introductions, rules, expectations, nothing out of the ordinary. Then I was shown my workstation and given a set of tutorials to start on to build up to the project I would be working on. I was heads down to work in no time and it felt great.

Eventually I was pulled into a meeting and introduced to two other interns. The three of us would be working together to build a proof-of-concept product from scratch. After hearing horror stories about maintaining legacy code, I was happy to hear we’d be building something ourselves. We discussed the details of the project and, more importantly, the technology we’d be using. The front end of our project would be built in Angular 2, which at the time was in beta. This would give everyone a chance to learn about the technology by letting the interns get their hands on it first and learn a thing or two.

Since we would be beginning development in a short time I knew I had homework to do. Luckily, I had just spent several semesters teaching myself new programming languages, so this was in my wheelhouse. I spent the evenings of my first week poring over tutorials, eBooks, and examples of Angular 2 to prepare for my role. I didn’t feel like an expert by any stretch but I felt that I could start making a difference, I felt ready.

The project had many struggles and pitfalls. More than once we found ourselves in a rut for several days before working together to find a solution. Roles in the team shifted several times and I was able to gain experience working with new front-end frameworks, databases, and the design principles used by Don’t Panic Labs. I recall feeling throughout the summer like I was growing as a developer at a rate many times greater than when I was working on my own projects.

Before the end of the summer we were able to put together a product and get it in front of several potential clients. My experience of working with my teaching colleagues echoed when talking to clients and getting feedback. I enjoyed hearing what they had to say and listening to their recommendations for changes and additions. This feedback was great, but in the back of my mind I always knew my time writing code full time could be running out.

As the remaining days of the internship dwindled down I started looking for an opportunity to find a permanent position writing software. I followed several leads and eventually found out that Don’t Panic was looking for a front-end developer. Before I knew it, I had another interview lined up. You’ll have to catch part 3 to find out more about that one.