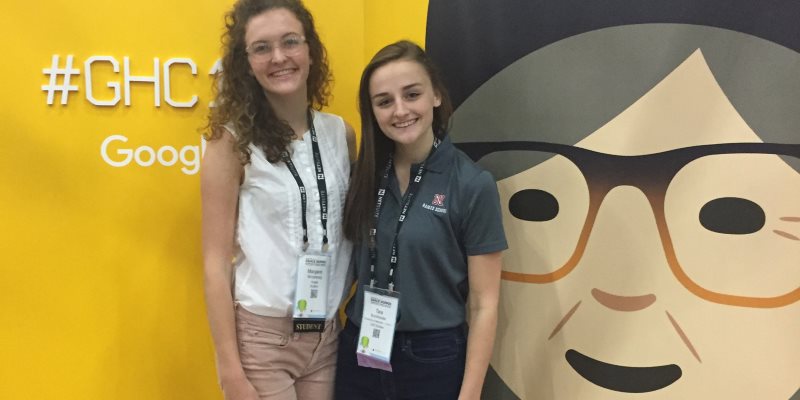 Note: This year we have two interns at Don’t Panic Labs, Maggie Witzenburg and Tara Brookhouser. They recently attended the Grace Hopper Celebration of Women in Computing in Houston, TX. We’re honored to have them as part of our team this year and appreciate the time they took to share their experience.

This past week we were blessed to attend the Grace Hopper Celebration of Women in Computing. Located in Houston, TX. The celebration brought together over 15,000 people in the tech industry. We found ourselves surrounded by roughly 95% women, professionals and students alike. The three-day conference consisted of two major keynote talks, smaller breakout sessions, and the career fair of all career fairs.

Tara: My favorite session throughout the week was the keynote presentation by the CTO of the United States, Megan Smith. She opened her presentation by speaking on the ongoing struggle for women’s equality, beginning with women’s suffrage. Megan referenced the Silent Sentinels, a group of women who protested for voting rights. Then, she talked about the efforts today of teaching computer science in public schools so that every student can have exposure in the subject. She ended her talk by asking the audience to make efforts locally to open these opportunities for future women. Before closing, Megan called on the audience to “be however we want to be,” to “work on whatever topics we want to work on,” and to “break open the doors.”

Maggie: Choosing a favorite session proved to be extremely difficult for me. Latanya Sweeney – a professor at Harvard – gave a thought-provoking speech on Data Privacy, a panel of professionals examined the Internet of Things: myth or reality, and another panel of women discussed creating social change through technology. Since I couldn’t choose one single session, I decided to bring up a key point from each.

That Career Fair Tho..

Walking into the career fair was one of the most intimidating/exciting/exhilarating experiences of the celebration. When over 250 of the country’s tech giants and top grad schools all convene in one place, it can be extremely overwhelming yet rewarding. Whether you’re networking with professionals or just picking up some cool swag, you could get lost in the expo hall for hours at a time.

After spending three days talking about career paths and emerging technologies, what better way to rest your tired brain than a DaNcE PaRtY!!!111!!! With Orlando based DJ Roonie G on the turntable, an ice cream float bar, and a silent disco, we got to kick back and dance with students, recruiters, and professionals (we even saw Megan Smith headed in to get her party on). For the first hour of the celebration, we could be found directly in front of the stage dancing way harder (and way better… subjectively) than anyone else — frequently being featured on the big screen.

After three full days of speakers and networking, we were bound to learn a few things.

Maggie: My absolute favorite thing about the Grace Hopper Celebration is how encouraging it is. I learned a lot through the sessions and speeches I attended. But at the end of the day, it was the fact that I was surrounded by 14,000 women in tech that resonated the strongest.

Tara: The best way to get women into the field is through academia. A lot of companies throughout the US have special outreach programs to work with local schools on promoting technology for all. Also, retention of women in tech can be harder than it sounds. Creating and keeping a culture where women feel comfortable is very important; the most successful companies in diversity have special programs in place for this reason.